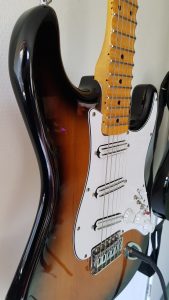 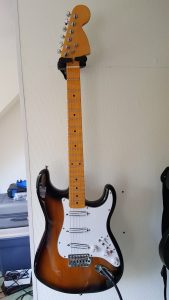 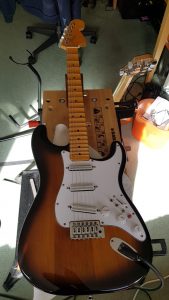 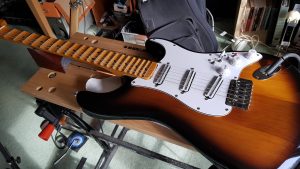 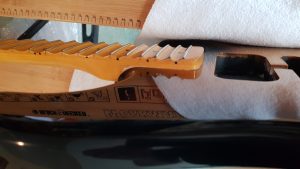 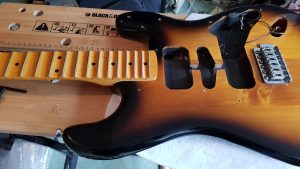 My Partscaster began as a Squire body and a thin neck aka Elioth, but as I was unhappy with the string balance and electronics, I decided to experiment.

The vintage-orange scalloped neck could play like a sitar, jazzy or country and of course blues-rock. Had to file it down in the joint area and it was not so clean (pic #1). The angle and fretboard are very even with the strings. The frets needed new crowning and polishing, some ends were sharp. One high fret hammered and ended up chewing next one with the string. Destroyed two high strings the first time stringing it.

The loaded plate I got as a better string balance, and the controls are versatile. They tightened the PU cables too much and it is pulling them around the Y axis. Had to chop away at the multiplex body to fit it all in. The pickguard was a bit too far in front, when filing it became very uneven. First time dropped it in place and screwed it in, there was no output so I had to install it twice and settled it.

It sounds like a bright axe on a sunny morning.

Problems I have also fixed: high frets needed reducing, nut needed to be filed down, a couple of high saddle screws to shave.